Rolling stock of the Weilberg Railway

At the beginning of this layout, there was a Busch mine train starter set, so the first locomotive was a BBA B360. The original is a battery-powered mine engine from East Germany. In the meantime, there are three of them, so that actually the entire operation (max. two passenger trains and one locomotive for supply runs and photo freights) can be handled purely electrically. For the passengers, this is certainly the more pleasant option for the tunnel passages, but industrial railway enthusiasts will see it differently. 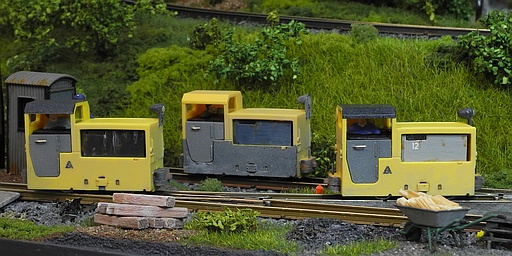 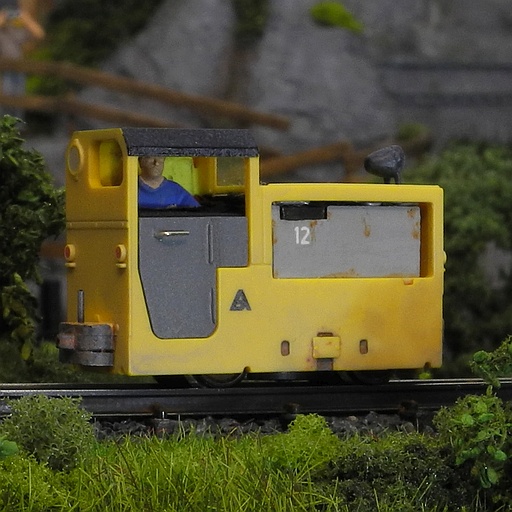 The B360s have undergone a slight overhaul before being put into service: Driver's torso, windows, detailed dummy doors, a colour touch-up and weathering. Two of them are illuminated, here the buffer circuit for the LEDs was replaced (Schottky diodes, larger capacitor) so that there is also flicker-free light. 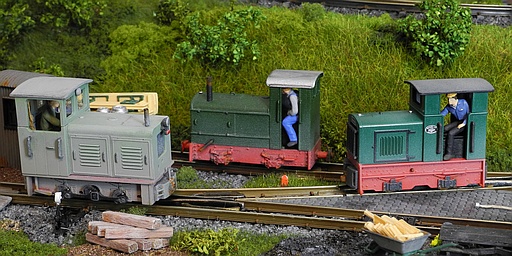 So far, the Weilbergbahn has four light railway diesel locomotives at its disposal: a Gmeinder locomotive, a Diema DS20, a JUNG ZL 233 and an LKM Ns2f from former East Germany. These locomotives are mostly used for supply runs and photo trains, but it is also possible to run the trains completely on diesel.

The Gmeinder and the Ns2f are from the Busch range and received a slight makeover, including: engine drivers, window inserts, colour refinishing and weathering; curtains on the Ns2f cab, a factory sign on the rear, added bell and door handles. 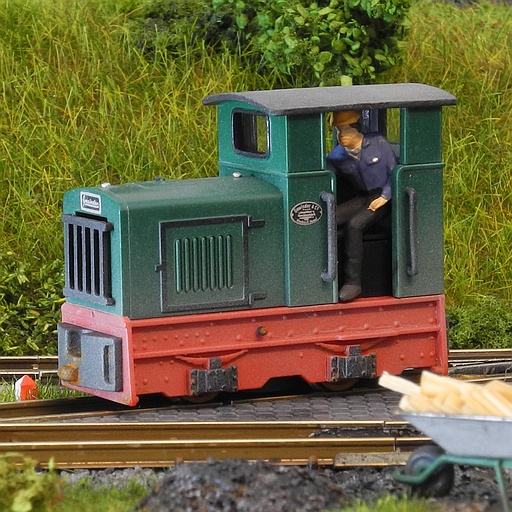 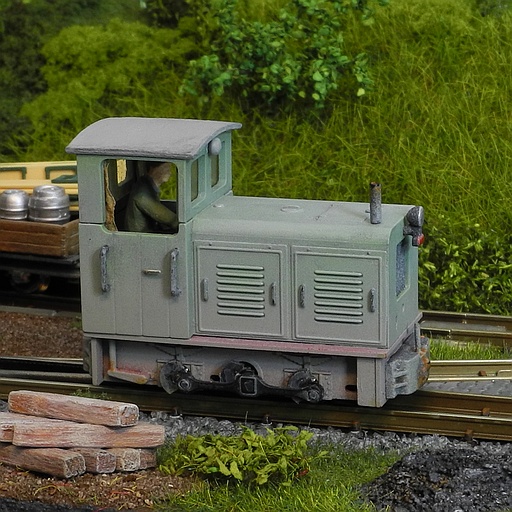 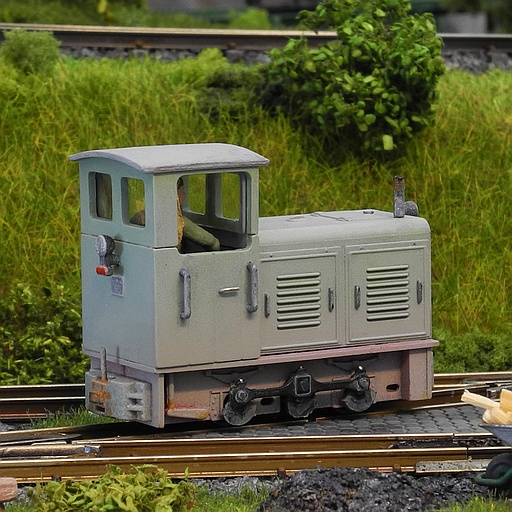 The DIEMA DS20 structure can be ordered at Shapeways. It is a design by Joachim Starke, who markets his 3D models there under the name T3Design. The structure is prepared for the "drive unit for conversion" by Busch. The result would be a compromise, however, as the axle bearings on the model were arranged according to the prototype, but the axles of the Busch drive unit have a larger wheelbase. Both axles would be out of line with the bearings, presenting a strange picture.

Therefore, the inside structure was modified to place the drive unit further forward with the rear axle matching with the axle bearing at the structure. The front axle bearings were cut out on the structure in such a way that they could be glued in on the opposite side to match the axle position on the drive unit. Again a compromise as this results in a to long whellbase, but it is visually more satisfying. The colour of the model was based on the DS20 waiting to be refurbished at the industrial narrow gauge railway museum at Frankfurt. 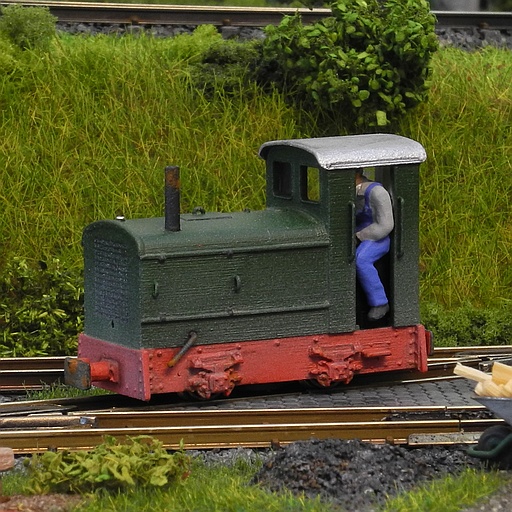 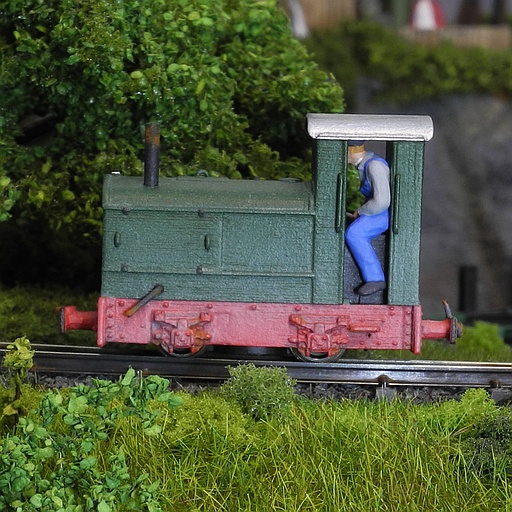 The JUNG ZL 233 is also a 3D-design by Joachim Starke, to be ordered at Shapeways. In contrast to the DS20, the "drive unit for conversion" by Busch fits under the loco without any adjustments and the wheels sit perfectly behind the axle bearings. The body was completed with handle bars (nickel silver wire, diameter 0.33mm), window inserts, factory signs and the magnetic coupling used by all my rolling stock. The paint scheme is based on the locomotive in use at the "Waldeisenbahn Muskau".

Here the drive unit does not protrude into the driver's cab, so this could be detailed with controls and a driver (without any amputations!). Even under the hood there is still some space, so the locomotive could be equipped with flicker-free white/red changing LED lighting at the front and rear. 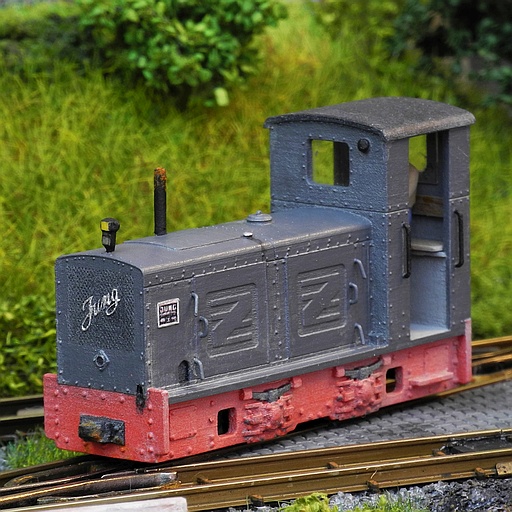 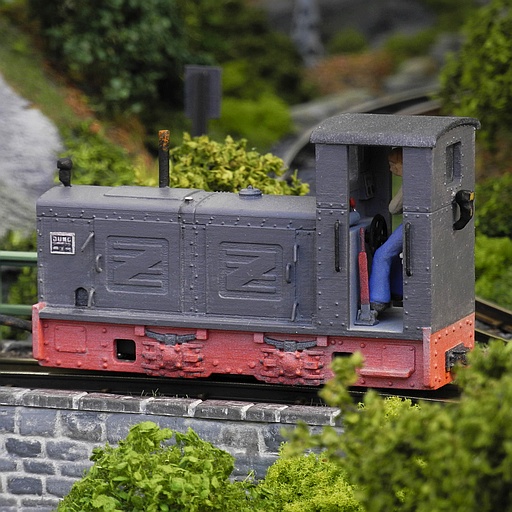 The Weilberg Railway uses two semi-open park railway coaches (manufacturer "Stadt im Modell") for their visitors if the weather is fine. These models were equipped with magnetic couplings and colour treated. The plastic axles supplied were exchanged for Märklin Z metal axles.

From Preiser's range of unpainted figures, a selection suitable for the rather narrow carriages was put together, painted and distributed on the seats. 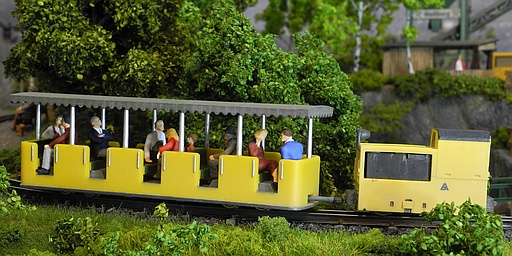 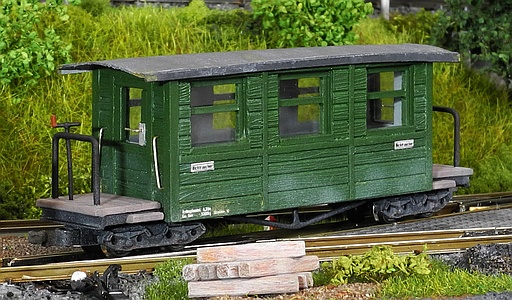 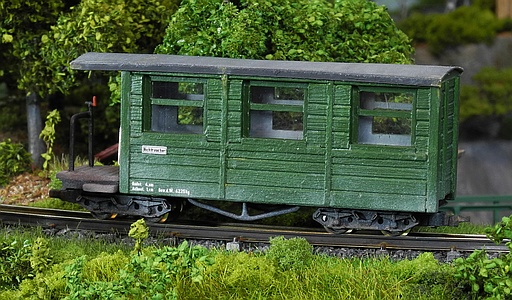 The Weilberg Railway had to be equipped with closed coaches for rainy days. As the "Modellbauwerkstatt-Halle" offers H0e kits of the coaches used at the Waldeisenbahn Muskau these were ordered without further ado - it should be possible to adapt them!

But in the end it was more a new construction, as these wagons are much too large for the clearance gauge of this layout. The bodies were narrowed and the height reduced, a new underframe was created from bogies and parts of two Z-gauge tank cars as well as polystyrene profiles.

The crew wagons from the Busch range are rather unsuitable for visitor traffic on the Weilberg Railway - with the open bridges safety concerns of the supervisory authority are to be expected. Nevertheless, one such wagon is kept for the staff. The car was built using the upper part of a Busch crew car and a long chassis from the "Fahrwerke zum Umbauen" (chassis for conversion) kit by Busch. A brake system and platform were added from polystyrene profiles. 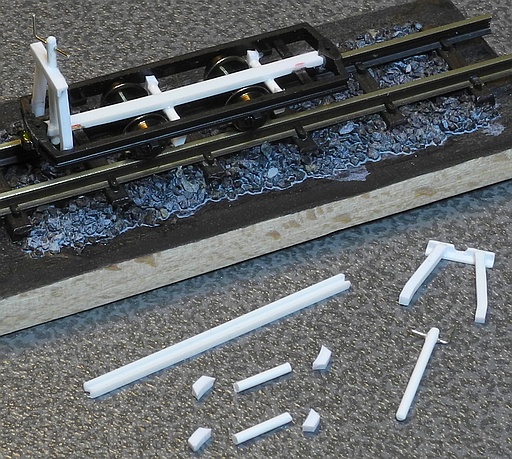 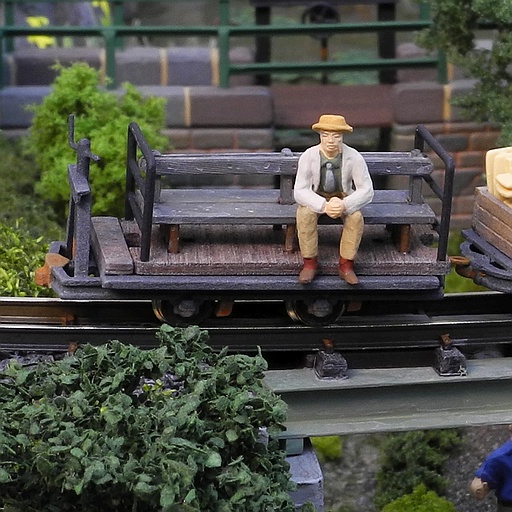 Basalt gravel or chippings are loaded into tipping wagons. Four of them still bear traces of use - heavily rusted and dented, they show visitors that industrial railways were actually built for real work. In addition, there are three museum-maintained tippers for photo trains. Loaded and empty trains are on display using easy removable inserts made of Styrodur and a thin ballast layer. 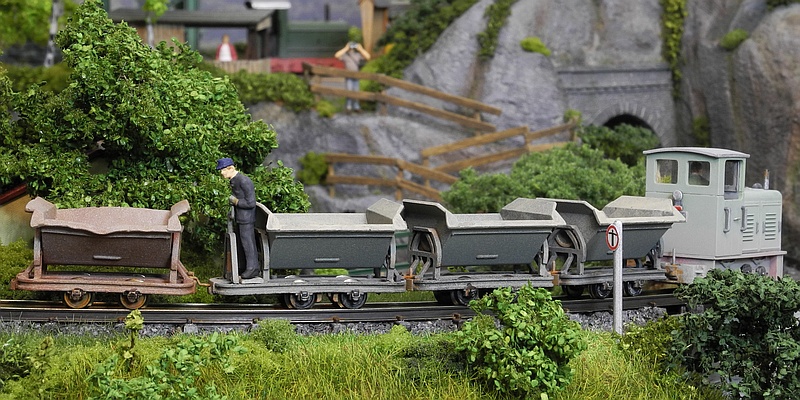 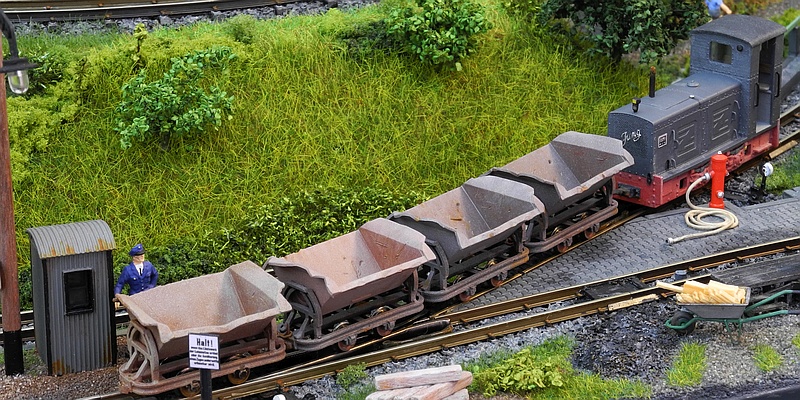 Basalt columns had been the main product of the former Weilberg quarry. Three flat wagons demonstrate this kind of transport to the visitors, two of them are new constructions using the "chassis for conversion" kit by Busch. Attachable loads allow for loaded as well as empty trains. 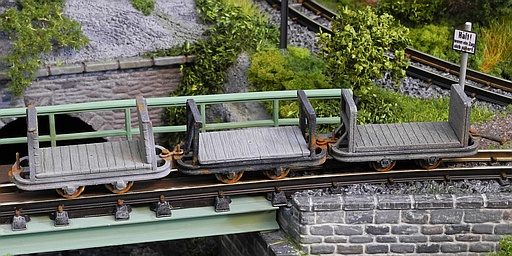 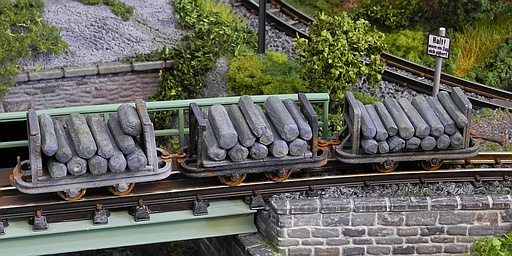 The crusher demonstration at Weilberg Quarry requires process water as a coolant for the crusher and as feed water for the locomobile used for propulsion. This process water is brought up the mountain by the Weilberg Railway itself using a water tank wagon. Again the construction is based on the "chassis for conversion" kit by Busch and a tank of an agricultural trailer from Preiser. A ladder, hose and some fittings were added. 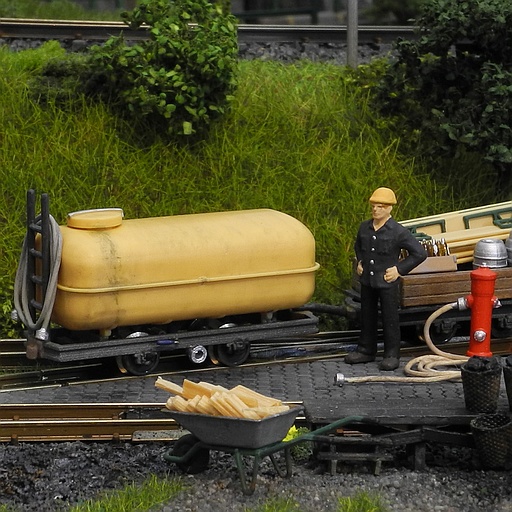 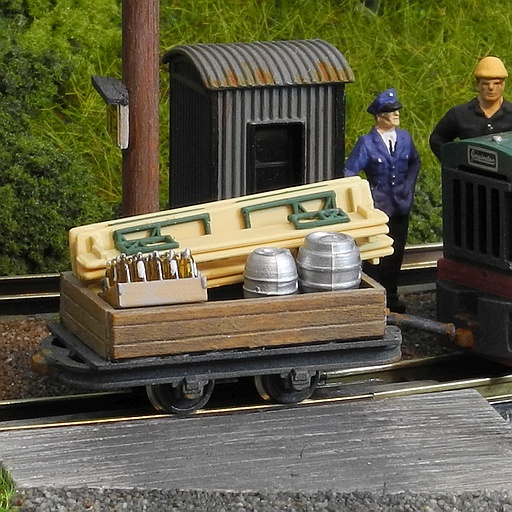 Such a vehicle should not be missing on any railway, as there is always something to transport. An exchangeable load insert allows the representation of different transports.

Drop side wagon with crane

Track-laying crews don't like to heave all their equipment and components onto and out of the wagons by hand, so the Weilberg Railway has a low-sided wagon with a hydraulic crane. The hydraulics have to be pumped by hand, but it's always better than lifting it yourself.

The wagon was built using a long chassis from the "frames for conversion" kit by Busch. The added brake system corresponds to the above open coach and the drop sides are parts from an agricultural trailer by Preiser. For the crane, various polystyrene profiles and a little wire were cut to size and put together. 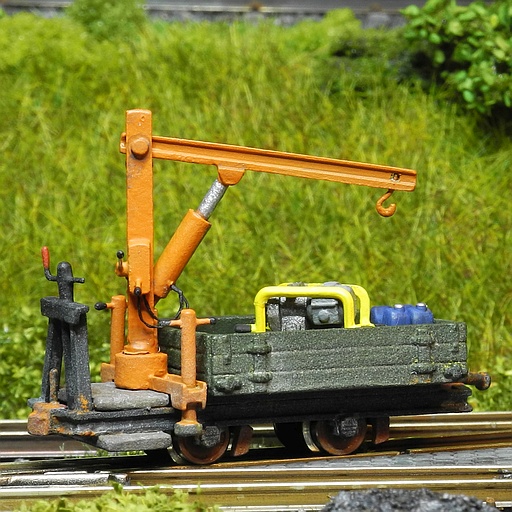